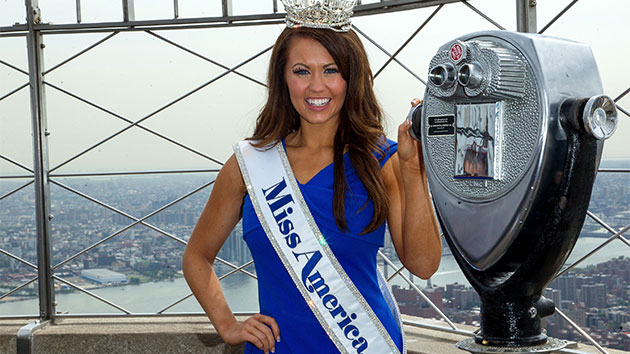 Caressa Cameron-Jackson, Miss America 2010, is part of a group of 19 former titleholders who are calling for the resignations of Carlson and Regina Hopper, the president and CEO and the board of trustees, according to The Associated Press.

Cameron-Jackson, 31, told "Good Morning America" Monday that she isn't surprised by Mund's letter, which accuses Carlson and Hopper of bullying, manipulation and intimidation.

Pageant organizers told ABC News, "We have supported Cara [Mund] for her entire year and we will continue to support her."

Carlson, the 1989 Miss America, denied the allegations in a statement posted to Twitter.

"I have never bullied or silenced you," Carlson wrote. "We've acknowledged your grievances and taken many steps to try to make your experience a good one."

Carlson went on, "Actions have consequences. Friday, as an organization we learned that $75,000 in scholarships is no longer on the table as a direct result of the explosive allegations in your letter. The impact won't stop there.”

Not only did Carlson deny bullying but she said that Mund's accusations have caused a "negative ripple effect" across the organization.

"[W]e are not going to do the victim-shaming here," she said. "I’m sure she [Carlson] didn’t want that when she was part of the #MeToo movement and I think that these sponsorships will return when they see that we are willing to do the right thing. I don’t think that it’s also fair if someone has [said], ‘You hurt me' to say, 'No, I didn’t.'"

Cameron-Jackson continued, "I think what should have been said was, 'I’m sorry for anything I have done that would have made you feel as though,' and then continue on, but you don’t get to outright say, 'No, I didn’t.'"

The Miss America organization announced June 5 that it would be eliminating its swimsuit competition and will no longer judge contestants based on physical appearance.

"We are no longer a pageant," Carlson said on "GMA" at the time. "We are a competition."

In place of the swimsuit portion of the competition, Miss America contestants will now take part in a live interactive session with the judges, the organization said.

Many thought changes to the contest were happening too far, too fast. But Cameron-Jackson said the call for new leadership has nothing to do with the end of the swimsuit competition.

"What was upsetting is finding out that the reason that the board voted to get rid of swimsuit was under the impression that the network who was going to air the pageant would not do so if the swimsuit competition was part of it," she added. "And then when it was found out that that was not the truth, that was just the beginning of a lot of undercurrents of transparency that states have been asking for, we as Miss Americas have been asking for and not getting it.

"And so that’s what this is really about and I hate that people are trying to make it a swimsuit issue when it's more about a transparency and a leadership issue."

Despite the turmoil, Cameron-Jackson said, she believes Miss America can thrive.

"I think it’s great that we are allowing and making sure that there is a space for accountability and then doing what’s necessary to ensure that we don’t continue down a path that’s wrong," she said.

Father’s Day gifts nationwide being ‘Made in America’
Biden says ‘America is back at the table’ as 1st foreign trip continues
‘Made in America’ companies to help keep cool this summer
“Ignorance is no excuse”: Ellie Kemper apologizes after decades-old link to controversial pageant emerges
First cruise ship sails from North America since 2020, with more than 95% vaccinated
Latin America reels from pandemic, desperate for vaccines as Blinken makes first trip to region