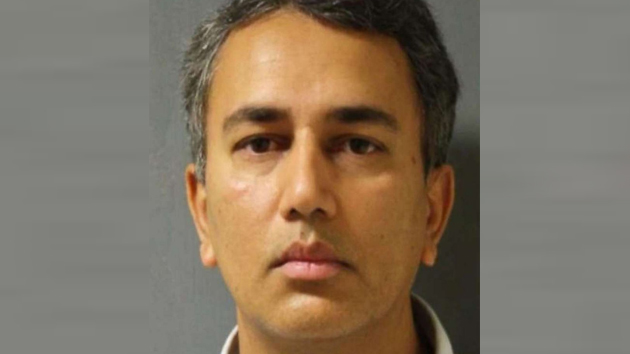 Houston Police(HOUSTON) — A former doctor who was convicted of sexually assaulting a patient who was immobilized in her hospital bed will not serve any jail time.
Shafeeq Sheikh, who was a medical resident on call at a Texas hospital at the time of the 2013 incident, could have been sentenced to as much as 20 years in jail.
But in Texas, juries decide both the verdict and the sentences, and while the jury in this case did determine that Sheikh was guilty of second degree sexual assault, his sentence was limited to 10 years probation.
Sheikh, now 46, was charged in the case in 2015 following DNA identification that connected him to the attack. He lost his job and had his medical license revoked in 2015, according to The Houston Chronicle.
Sheikh admitted on the witness stand to engaging in sexual intercourse with the patient but said the encounter was consensual.
He acknowledged going to the female patient's room at Ben Taub Hospital in Houston three times on the early morning of Nov. 2, 2013, getting more physical with the patient with each encounter.
Sheikh testified that on the first visit to her room, he was checking the patient's chest — as she had been admitted following an asthma attack. He said that she grabbed his hand and placed it on her breast, and he alleged that she grabbed his genitals on a subsequent visit, according to The Houston Chronicle.
"I took it as a sign that she wanted to have sex," Sheikh said in court, according to The Chronicle.
On his third visit to the patient’s room that morning, Sheikh testified, he had sex with the patient, who was immobilized by medications and drifting in and out of consciousness, according to court records.
"It immediately sunk in that something terrible had happened and I was scared for myself," Sheikh said in court. "You’re not supposed to have sex with a patient. That’s part of medical ethics," he said in court about what he described as a one-minute interlude, according to The Chronicle.
The victim, whose name is being withheld because of the nature of the incident, reported the assault the following day and was tested using a rape kit, according to The Washington Post.
The victim testified that she repeatedly pushed the call button for help, but witnesses testified that the button had been unplugged from the wall, The Chronicle reported.
A spokesperson for Harris County District Attorney Kim Ogg told the Washington Post that the office respects the outcome of the case.
“The jury voted on behalf of the community to determine his sentence, and although prosecutors sought prison time, we respect the process, and the jury’s decision, which carries with it a lifetime of registering as a sex offender,” Schiller said in a statement.
In court, Sheikh's attorney Lisa Andrews alleged that the woman enticed him to have sex with her.
"Here we have this Latina woman with her fake boobs that came onto that little nerdy middle-aged guy, and he lost his mind," Andrews said during her closing argument, The Chronicle reported.
Andrews told ABC News that her client has "always been very remorseful for his conduct on that night," but when asked why he didn't turn himself in after the 2013 incident, waiting instead to be charged in 2015, she said "you can be remorseful of it and follow the advice of your attorney."
"He has always acknowledged that it was a severe lapse in judgment," Andrews said. "He violated his Hippocratic oath, he violated his marriage vows."
She said that she and her client "accept" the jury's guilty verdict, even though they had hoped that he would be found not guilty.
"I do think that the probation [sentencing] verdict reflected perhaps their [the jury's] residual doubt about whether or not she consented," Andrews said. "The jury deliberated for 15 hours on guilty or innocent, so obviously it wasn't a cut or dry decision. There were a lot of different facts and variables they were considering."
Dane Schiller, a spokesperson for the Harris County District Attorney’s office, noted that they respect the jury’s sentence even though it is significantly less harsh than the sentence they recommended.
“After being presented all the evidence, the jury convicted this man of rape and decided that he should be sentenced to 10 years of probation; the jury voted on behalf of the community to determine his sentence, and although prosecutors sought 20 years in prison, we respect this process, and the jury’s decision, which carries with it a lifetime of registering as a sex offender,” Schiller said in a statement to ABC News.
Andrews dismisses comparisons between this case and that of Brock Turner, the Stanford swimmer who was found guilty of sexual assault and sentenced to only six months in prison before ultimately only serving three months behind bars.
Andrews said she didn't feel comfortable commenting on Turner's case or any comparisons between the two because she doesn't know all of the details of the Turner case, but she did point to the jury's verdict as telling.
The jurors were the ones who "[sat] in the courtroom and listen[ed] to two weeks of all of the evidence and I think that makes a big difference," Andrews concluded.
A spokesperson for the county hospital system that operates Ben Taub Hospital said the facility had cooperated fully with the investigation.
“Harris Health System has been supportive of the legal process and has fully cooperated throughout the investigation and trial phase of this case," spokesman Bryan McLeod, told The Chronicle in a statement. “We care deeply about the safety and well-being of our patients,” he said.