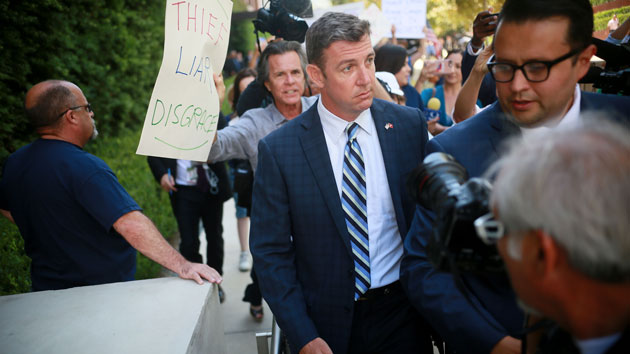 Sandy Huffaker/Getty Images(SAN DIEGO) — An indicted opponent: It's an opportunity most long-shot candidates would die for.
But in the wake of federal charges that Rep. Duncan Hunter, a California Republican, conspired with his wife to illegally spend more than a quarter of a million dollars of campaign funds for personal use, his Democratic challenger, Ammar Campa-Najjar, has proved remarkably reluctant to hit Hunter for his alleged crimes.
While the blistering 47-page indictment, filed Tuesday, has bolstered Democrats’ hopes of ousting Hunter, California’s 50th Congressional District has long been a deep-red holdout in a staunchly blue state – President Donald Trump won the district by a 15-point margin – and Hunter remains the favorite to win in November.
In an interview with ABC News, Campa-Najjar gave a heavily qualified critique of Hunter, repeatedly praising the former Marine's record of military service, and variously describing Hunter as “a great man who served our country,” a man who “never left the battlefield,” “a man who has completely lost his way,” “a guy who’s down on his luck,” and “a swamp creature.”
“I really do believe that Duncan Hunter was once a man of integrity, and he served our country and risked life and limb so that me and you could even have the luxury to have this conversation -– me and you both luxuriate under the shade of freedom that he’s provided us,” he told ABC News.
A 29-year-old former Obama staffer who has never held elective office, Campa-Najjar is billing himself as a progressive in the mold of New York's Alexandria Ocasio-Cortez and others running on social and economic justice platforms and refusing donations from corporate PACs.
Unlike many anti-war insurgents on the left flank of the Democratic party, however, Campa-Najjar has repeatedly applauded his opponent’s military record, speaking at length, without prompting, about Hunter’s service in the armed forces.
“He’s someone who fought the wars that we have abroad so I could have the luxury to fight the ones we wage within,” Campa-Najjar said. However, he noted, “I think when he got to Washington, he lost his way, and got engulfed in the culture of corruption.”
Many Democrats have characterized recent indictments of Trump administration officials and unethical use of campaign funds by Republican leaders as symptomatic of broader, deep-rooted corruption inside the Beltway. Asked to weigh in, Campa-Najjar stressed that the corruption is not reserved to the GOP.
“I think it’s a symptom of endemic corruption that exists in Washington writ large. It’s not party-specific,” Campa-Najjar said. Later in the interview, the Democrat pivoted and described Hunter as corrupt in particular, saying, “he has fully become a swamp creature that we’re worried about in Washington.”
Meanwhile, Hunter appears to be placing the blame on his spouse, Margaret Hunter, for the federal crimes the pair allegedly committed.
“She handled my finances throughout my entire military career, and that continued on when I got into Congress,” Hunter said in an interview on Fox News Thursday night.
Pointing out that his wife acted as his campaign manager, Hunter said, “whatever she did, that’ll be looked at too, I'm sure, but I didn't do it.”
Asked about Hunter’s apparently shifting the blame to his spouse, Campa-Najjar told ABC News the move is an example of “toxic masculinity,” defining the term as “when men don’t take responsibility for their own actions, and pass the buck downward.”
“In this era of really hyper-toxic masculinity, seeing that happen on a personal level between him and his wife, on national television – it kind of sent shivers down my spine. But I think it’s because he’s just backed into a corner,” Campa-Najjar said. “Using your power and being in a position to blame your subordinates, I think, is a symptom of toxic masculinity.”
Still, Campa-Najjar quickly went on to note, he is impressed with Hunter’s military service, and believes the alleged misuse of campaign funds show that Hunter has been corrupted by his time on Capitol Hill.
The 60-count indictment details Hunter and his wife’s alleged theft from campaign coffers.
The alleged expenditures are eclectic, ranging from $6,150 spent on private school tuition at Christian Unified Schools to an assortment of outlays on tobacco, alcohol, fine dining and fast food. The indictment details “200 separate occasions between 2010 and 2016 that Margaret Hunter spent a total of $5,068.34 in Campaign funds at fast food restaurants such as In N Out, Carl's Jr., Jack in the Box, Wendy's, McDonalds, Burger King, Taco Bell, La Salsa, Pizza Hut, Domino's Pizza, Weinerschnitzel, Kentucky Fried Chicken, and Menchies Frozen Yogurt.”
Several of the purchases were also allegedly disguised as charitable contributions – money spent at a local dentist was written off as a charitable contribution to “Smiles for Life,” while Margaret Hunter advised her husband to buy “Hawaii shorts” at a golf pro shop “so that they could falsely 15 describe the purchase later as "some [golf] balls for the wounded warriors,"” the indictment reads.
Provided multiple opportunities to censure his opponent for the federal crimes enumerated in the indictment, Campa-Najjar instead stressed Hunter’s virtues, painting a picture of a well-meaning public servant corrupted by his time in office. “I think he went the wrong way, and took the wrong advice, and got involved in the wrong way of politics,” Campa-Najjar said.
Neither Duncan Hunter nor Margaret Hunter’s legal team immediately responded to ABC News’ request for comment.
In a Wednesday interview with ABC affiliate KGTV, Hunter dismissed the indictment, calling the FBI and the Justice Department “a politically motivated group of folks” and describing the Justice Department as “the Democrats’ arm of law enforcement.”
Copyright © 2018, ABC Radio. All rights reserved.