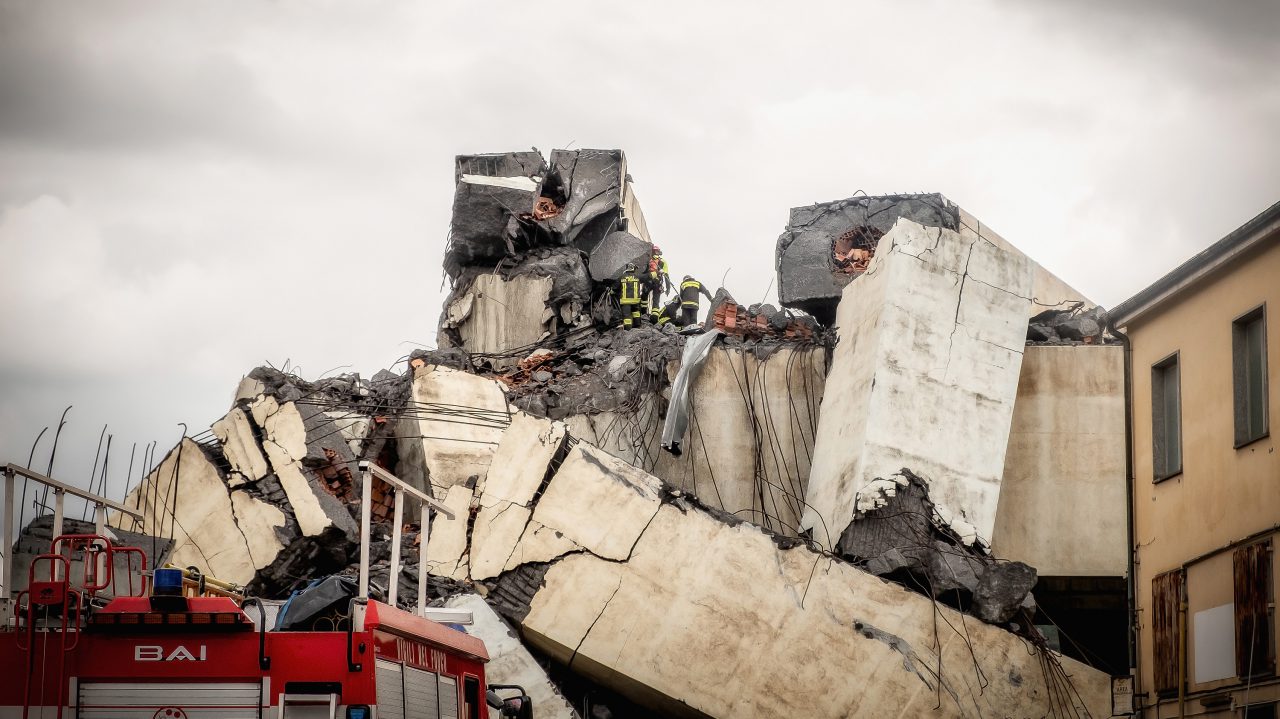 Awakening/Getty Images(GENOA, Italy) — Evacuees who were living near the Genoa bridge that collapsed and killed 43 people last week have been stopped from recovering belongs Monday over concerns about the structure’s instability, according to reports from Italian media.
Creaks were heard from the eastern pillar of the bridge overnight and again Monday morning, causing increased alarm about the stability of the bridge's remaining portions, reports said. Fire services specified the noise was not caused by the wind.
Hundreds of people were forced to evacuate their homes below the massive structure following the bridge's collapse.
Emergency workers were also told to leave the "red zone" –- the unsafe area under and around the bridge — after the creaks were heard. Expert technical teams moved in to check the structure this morning.
Prosecutors in Genoa told reporters they were ready to order the destruction of what is left of the bridge, above the evacuated buildings, if fire services said there was "concrete danger."
Investigators continue searching for the reasons for the Morandi Bridge collapse in Genoa last week. Design flaws and poor maintenance are believed to have been the causes, but questions continue to be raised and expert theories abound in the Italian media.
Roberto Ferrazza, president of the inspection commission set up by the Ministry for Infrastructure and Transport, told RAI state broadcaster on Monday that the bridge first "twisted and then collapsed." He said investigators will need more time to establish the dynamics of the collapse.
Interior Minister Matteo Salvini said Monday on state broadcaster RAI that the government was "studying" the possibility of nationalizing the motorway operator Autostrade per l'Italia, which runs the highway that uses the bridge. Following the disaster, some government members said they wanted to revoke Autostrade’s license.
To assuage anger and mounting tension in the city, Autostrade managers announced the company would lift toll payments across Genoa's highway network starting Monday, until the highway is repaired.
At the large state funeral for 20 of the victims, held in Genoa on Saturday, members of the party that led Italy's previous government, the center-left Democratic Party, received jeers and whistles while members of the present government, from the League and Five Star parties, were applauded when they arrived. Many Italians have praised the new government for abandoning what they believed were the non-transparent and corrupt ways of previous governments.
The new populist government said they would act fast to identify those responsible for the bridge collapse and promised to house the evacuated quickly, according to RAI. The temporary flats will be provided first to the elderly and people with families, the news agency said, and the first five were assigned Monday.
The governor of the northwestern Liguria region around Genoa, Giovanni Toti, said he hoped to have all the evacuated people housed by mid-November, according to ANSA, President Donald Trump offered condolences and assistance in a phone call to Italian Premier Giuseppe Conte, the news agency reported.