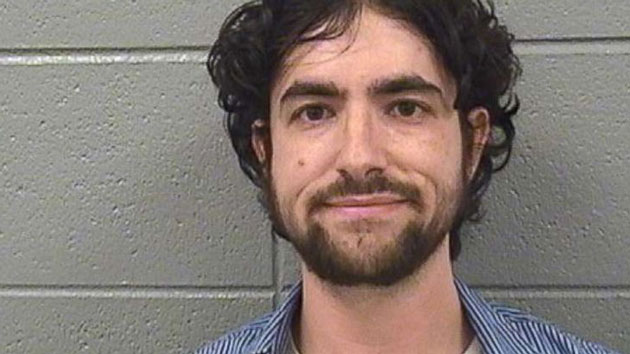 Cook County Sheriff's Office(CHICAGO) — A Chicago-area man has been arrested for allegedly threatening to "shoot" and "blow up" the conference of conservative high school students held in Washington last month that grabbed headlines when the featured speaker, Attorney General Jeff Sessions, uttered the phrase "lock her up."
28-year-old Alexander Micah Cohen was arrested outside Chicago late last month, according to authorities in Cook County, Illinois.
The Metropolitan Police Department in Washington, D.C., launched an investigation into the alleged threats after the parent of a student attending the conference saw some of Cohen's messages posted online and contacted the FBI.
When an MPD officer then contacted Cohen, he insisted his comments were "a joke," according to an account from the officer filed in court. Cohen has now been charged with making a false report connected to a weapon of mass destruction – a felony.
Four weeks ago, while young conservatives from across the country were convening at George Washington University in Washington for the High School Leadership Summit, Cohen posted on his Twitter page a picture of a man holding a baseball bat wrapped in metal spikes and this message: "On my way to #HSLS2018 to greet the nice conservative teenagers."
Cohen lives in Skokie, Illinois – more than 700 miles away from the nation's capital.
Just days later, Sessions made national headlines when – with an amused smile – he repeated the phrase "lock her up" after students started chanting it. The phrase was a common call at Trump's rallies during his 2016 presidential campaign, with Trump supporters calling for Hillary Clinton to be jailed for her use of a private email server as secretary of state.
Archived versions of his Twitter page show that on July 26, two days after Sessions appeared at the conference, Cohen followed-up his previous Twitter posting with a picture of himself and this message: "I'm riding through D.C. [to] go and shoot GWU up … We gon' come and blow GWU up."
That message, with its explicitly threatening language, prompted local police in Washington to seek help from Twitter to identify the person who posted it.
When police contacted Cohen, he told the officer that she "should focus on others who post photos of guns," detective Elisa Brown wrote in court documents. "When ask[ed] the meaning of his posting on July 26, 2018, [Cohen] declined to comment any further."
It's unclear why the case is only now becoming public.
Cohen's Twitter page has been suspended. But a search of his name online reveals it's not the first time his posts have raised eyebrows.
In June of last year, he falsely posed as an online publication’s editor-in-chief and pushed out "fake news" after a gunman opened fire on Republican lawmakers practicing baseball at a park outside Washington, seriously wounding Rep. Steven Scalise, R-Louisiana.
In the wake of the attack, Cohen posted an infographic that stated: "Killing 3 GOP senators prevents ten 9/11s."
Copyright © 2018, ABC Radio. All rights reserved.

Paralyzed man uses exoskeleton suit to get down on knee to propose to girlfriend
Rep. Hank Johnson among 10 demonstrators arrested at voting rights protest
Ohio man charged with hate crime related to alleged plot to commit mass shooting of women
Common reveals how girlfriend Tiffany Haddish has made him a new man
Man falls to his death while hiking with fiancée’s 9-year-old son above waterfall
Man bitten by alligator, seriously injured: Officials