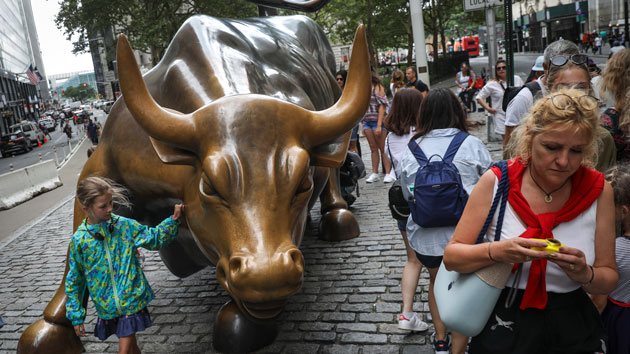 Drew Angerer/Getty Images(NEW YORK) — Wednesday marked an important milestone for the stock market: the bull market turned 3,453 days old, making it the longest run in American history.
The current bull market started nearly a decade ago on March 9, 2009, near the end of the Great Recession, which wreaked havoc on the American economy from December 2007 to June 2009.
The S&P 500, an American stock market index that measures the market caps — the value of a company's outstanding shares — of the 500 largest publicly-traded companies, hit 676.53 on March 9.
Real gross domestic product (GDP), the most important measure of a country’s economy, fell more than 4 percent during the recession. In October 2009, a few months after the recession began, the unemployment rate peaked at 10%. Nearly 8.7 million jobs were lost, and consumer spending saw its most severe drop since World War II, according to the U.S. Bureau of Labor Statistics.
Since then, the road to recovery has been slow and steady, aided by federal stimulus packages like the American Recovery and Reinvestment Act of 2009, and stimulus efforts by the U.S. Federal Reserve, including keeping interest rates at historically low levels. A decade later, by some measures, economic activity has bounced back more quickly than it did after 1929 and the Great Depression.
Now, the S&P 500 has more than quadrupled from its lowest point. Unemployment was at 3.9% for July and the GDP rose at an annual rate of 4.1% in the second quarter of 2018. Consumer spending has been steadily rising, and the country has added jobs for the past 94 months.
Still, reaching this market milestone hasn’t been easy.
Hurdles along the way included the downgrading of U.S. government debt in 2011 for the first time ever, crises in Europe, including a bailout for Greece that had global economic reverberations, and worries about the slowing Chinese economy.
Pessimistic investors have dubbed this period “the most hated bull market ever,” but some suggest that the skepticism has in fact helped fuel the longevity.
The terms “bull market” and “bear market” are used to describe cycles of stock prices. The period of time when stocks are rising is called a bull market, whereas falling stocks are referred to as a bear market. The use of the animal terms started on Wall Street in the late 19th century.
“Bulls” represent “bullish,” or aggressive, investors who buy stocks hoping that they will rise so they can sell them for more than they bought them. Market sentiment is optimistic, and generally there is a 20% or more rise in a broad market index over a period of at least two months.
“Bears,” on the other hand, refer to “bearish,” or conservative, investors who sell stocks, hoping that their price will drop in the future. The sentiment is pessimistic, and the broad market index generally falls at least 20% over two or more months.
The current bull run is now longer than the one in the 1990s — which lasted for 3,452 days from October 11, 1990 to March 24, 2000. During that time, the S&P 500 increased 417%, whereas the current run has seen an increase of just over 323%.
“Tech led the way,” S&P Dow Jones Indices Senior Index Analyst Howard Silverblatt said of the 1990s. Technology companies are similarly leading the way again.
“Now," Silverblatt said, "tech accounts for 22.3% of the returns of the S&P 500 index."
“The big difference between technology then and now is that technology now has actual earnings," he said. "Back then it was more hope…so it’s a totally different scenario now than it was before. But we also have current issues we have to deal with, like rising interest rates, tariffs, and trade issues,” he added.
Will the bulls continue to run up even more economic growth?
Silverblatt is hopeful. Bullish, even.
“Basically, the fundamentals are there," he said. "Almost every metric you look at is strong. But the negatives are the uncertainty and the velocity at which things can change.”
If overall optimism continues, then the bull market could carry on even in spite of more pessimistic investors.
Copyright © 2018, ABC Radio. All rights reserved.