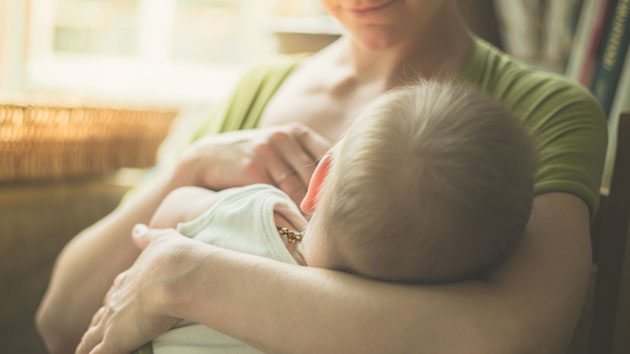 iStock/Thinkstock(NEW YORK) — Stroke is the third-leading cause of death for women, according to the Centers for Disease Control and Prevention (CDC). A new study from the American Heart Association (AHA) says breastfeeding may be added to the list of ways to reduce the risk of stroke later in life.
Several risk factors (such as diabetes, high blood pressure, and smoking) and protective factors (such as controlling blood sugar and blood pressure and exercising), have been identified for stroke by the American Stroke Association.
To find this new protective factor, researchers from the University of Kansas looked at data from 80,191 women from The Women’s Health Initiative Observational Study, which tracked the health habits and medical outcomes for women between 1993 and 1998. At this time, the average age of the women was 63.7.
These women were asked to report how long (if ever) they had breastfed their children. Of the women who did breastfeed, 51 percent of them breastfed for one to six months, 22 percent for seven to 12 months, and 27 percent for 13 or more months. In 2010, after adjusting for other factors which may have been contributed (level of exercise, smoking, etc.), researchers tallied up how many post-menopausal women had experienced a stroke during the follow-up period.
What did the researchers find?
Compared with women who had never breastfed, stroke risk was 23 percent lower overall in women who did. It was most pronounced in non-Hispanic black women, who had a 48 percent lower risk, followed by Hispanic women, who had a 32 percent lower risk. White women showed a 21 percent lower risk. There was a slightly lower reduction in overall stroke risk, 19 percent, for women who had breastfed for at least one to six months.
What are the current breastfeeding guidelines?
The guidelines, set by the American Academy of Pediatrics, recommend that women breastfeed for at least six months to reap the maximum benefits of breastfeeding for both the mother and baby.
Dr. Lisette Jacobson, lead author and assistant professor at the University of Kansas School of Medicine in Wichita, hopes that this study will encourage women to follow these guidelines.
"For women of reproductive age who are thinking of having a baby, I would say to strongly consider breastfeeding as a part of your birthing plan, at least for the recommended six month period," she told ABC News.
The study was observational, the researchers didn’t intervene and ask one group to breastfeed longer or shorter, so it cannot establish a “cause and effect” relationship between breastfeeding and stroke. The data does seem to link the two, however, and Jacobson does hope that the findings of this study will spark further research to learn more about the relationship.
She stressed the racially relevant findings, which showed the greatest benefit for non-Hispanic black women and Hispanic women. Stroke also happens to be leading cause of death overall in non-Hispanic black women and Hispanic women over the age of 65, so Jacobson says the study may give priceless information to public outreach programs about breastfeeding.
“We need to increase public awareness of breastfeeding and maternal outcomes later in life in general," Jacobson said, "but especially for those populations — non-Hispanic black and Hispanic Americans — who face a larger health burden from stroke."
Richa Kalra, M.D., is a resident physician specializing in psychiatry and working in the ABC News Medical Unit.

Hundreds gather for Miya Marcano’s Celebration of Life ceremony
Prosecutors say nuclear engineer for Navy, wife accused of ‘espionage-related’ crime, pose flight risk
Life imitating art at New York City’s most famous firehouse, thanks to ‘Ghostbusters’ fans
Issa Rae discusses married life and the possibility of having kids in ‘Self’ magazine
Capital Gazette shooter sentenced to life in prison without the possibility of parole
FDA panel recommends Pfizer boosters for people over 65 or high risk, votes ‘no’ for general population