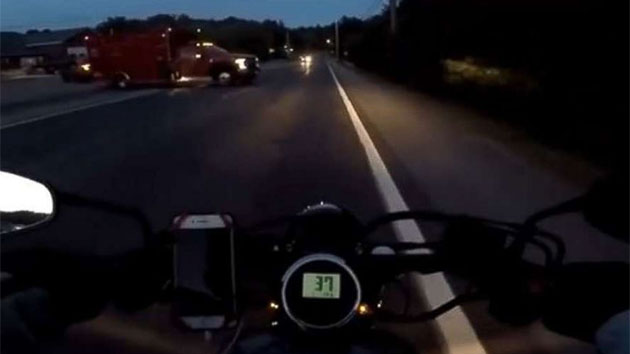 Coventry Police Department(NEW YORK) — A 13-year-old boy with autism and ADHD stole an ambulance and crashed into an unoccupied police car and a motorcyclist in Rhode Island, authorities said Friday.

The unidentified boy was taken by his mother to Coventry Fire Station Number 7 Thursday because he was agitated, according to the Coventry Police.

That's when the boy took off, ran into a garage bay at the station and hopped into the ambulance, authorities said.

“The juvenile locked the driver’s door, started the ambulance and placed the vehicle in drive,” said a statement from Coventry Police.

Coventry Fire Chief Brown told ABC News’ Rhode Island affiliate WLNE that it is standard practice for fire trucks to have the keys left in the ignition.

The boy drove the ambulance erratically across Route 117, police said.

Surveillance video shows Firefighter Scott Brown trying to hop on the truck and into the passenger seat before getting thrown to the ground.

Around the same time, Nicholas Croce, 20, was riding his motorcycle on the road at about 45 mph, police said.

When the ambulance crossed Route 117, Croce's motorcycle collided into it, surveillance video shows. Croce's helmet camera also captures the terrifying moment when he is about to crash into the rig.

Despite being injured himself, Brown crawled over to assist Croce, authorities said.

The ambulance ultimately came to stop in a ditch across the road, WLNE reported.

No one was seriously injured, police said.

Brown was hailed as a hero for trying to stop the ambulance and helping Croce, who suffered a broken finger on his left hand. The incident "reminds us of the difficulties our officers and firefighters face when assessing and treating individuals who suffer from mental health disorders," according to a statement.

"We are grateful that this incident did not result in serious injuries or loss of life,” the statement continued.

The boy was not arrested, police said. Instead, he was taken to the hospital for evaluation.

The incident is under investigation.

Police said the boy and his mom are "struggling with the aftermath of this incident."

"We commend the dedication and resiliency it requires of parents that wake daily to meet the challenges presented in caring for a child or adult with Autism," police said in a statement.