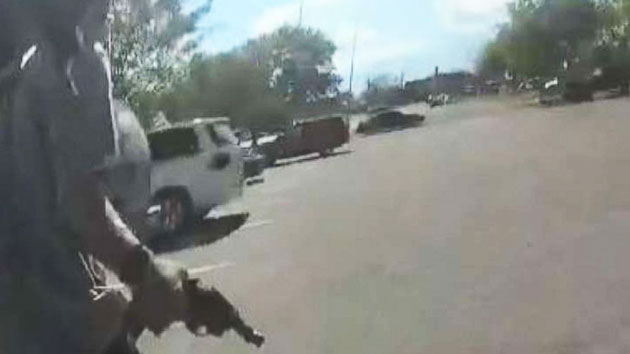 KOAT via ABCNews.com(ALBUQUERUE, N.M.) — Police body cam video captured footage of an alleged shoplifter opening fire on two officers in the parking lot of a Walmart in New Mexico, according to a report.
The video appeared to show Charles Edward Purvis, 23, taking shots at the officers after allegedly shoplifting from the retail store in Albuquerque, according to ABC News’ New Mexico affiliate, KOAT.
Purvis is seen walking out of the Walmart after allegedly stealing something, police said. When the video starts, he is seen running from the officers for a few feet before turning around and shooting.
The officers, whom the Albuquerque Journal identified as Brock Knippwrath and rookie officer Kyle Frederickson, were not wounded, police said.
The officers continued to pursue Purvis, who climbed a fence nearby, according to KOAT.
“All our actions are based on his actions, so him firing at us, him fleeing from us, creates a response from us. A response at that time, because he had used that weapon in a crime against an officer, was to set up a huge perimeter and get him into custody,” said Albuquerque Police officer Simon Drobik.
The two officers tracked Purvis to an empty home and forced him out several hours later using gas, according to KOAT.
No one was injured in the shooting, the chase or the stakeout, police said.
Purvis was arrested and charged with assault with a deadly weapon and assault with intent to commit a violent felony against a police officer, according to KOAT.
Purvis had previously been charged in 2014 with felony burglary and in 2016 on several misdemeanor charges, according to his arrest warrants.