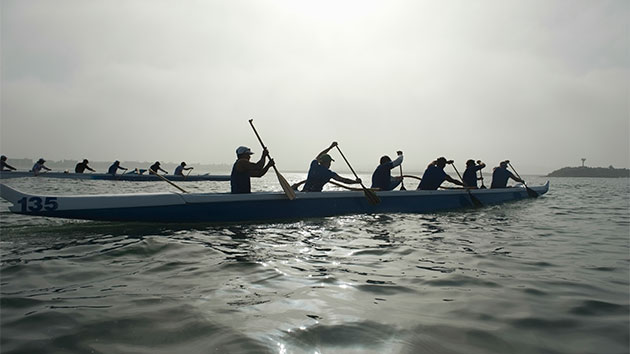 iStock/Thinkstock(HONOLULU) — An ocean rowing team attempting to make history is facing one last obstacle on its way to Hawaii: Hurricane Lane.

Mick Dawson and Steve Sparkes, the two-man crew of the Cockleshell Pacific Endeavor, and both former Royal Marines, are taking part in the Great Pacific Race, which takes participants from Monterey, Calif., to Honolulu, Hawaii.

Sparkes, who lost his vision following a diving accident during his time in the Royal Marines, is attempting to become the first blind person to row across the Pacific Ocean.

Chris Martin, the race director of the Great Pacific Race, told ABC News that the team deployed a parachute anchor to prevent the boat from being blown closer to the hurricane. Martin said Dawson and Sparkes later pulled anchor and deployed a drogue, which keeps the boat perpendicular to the waves and would allow them to use winds from the storm to keep moving.

Martin said Friday that the team was resting in their cabin as the weather pushed them along and planned to start rowing again the next day when the waves calmed down.

A tracking map on the race website showed that the team was 137 nautical miles from the finish Friday. An August 23 update on the Great Pacific Race website predicted that the team would arrive in Hawaii in the middle of next week but said it depended on the hurricane.

According to an 5:00 PM EDT update from the Central Pacific Hurricane Center on Friday, Hurricane Lane was a Category 2 hurricane moving north at 5 mph with maximum wind speeds of 105 miles per hour.

An Aug. 22 update on the Great Pacific Race website said the team was outside the radius of the storm, but they were warned to expect waves of 16 feet or more, as well as rain and thunderstorms.

Dawson and Sparkes have faced a series of obstacles since setting out for Hawaii on June 6. In an update from the Cockleshell Endeavor Facebook page on July 2, the team said they had lost three oars and were using their shortest set. An Aug. 19 update from the Great Pacific Race said that Sparkes had dealt with pain in his knee and his shoulder during the journey. Dawson, who previously rowed cross the North Pacific Ocean from Japan to San Francisco and twice rowed across the Atlantic Ocean, picked up the rowing work while Sparkes recovered.

Of the five teams competing in the 2018 race, two have already finished, and two others have withdrawn. The Cockleshell Pacific Endeavor is the only team still rowing.