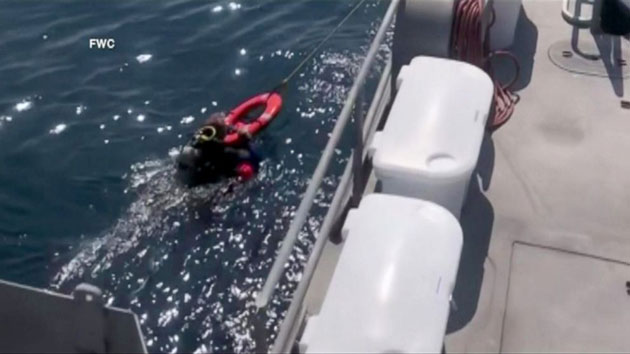 FWC(HUDSON, Fla.) — After hours of searching the waters off the coast of Florida, rescuers on Thursday found a missing diver who they said had spent an entire night alone, lost at sea, but said he had "a will to survive."
Terry Hayes, 57, and Michael Pavlich, 34, were exploring a popular scuba diving site on Wednesday known as the RJ Thompson wreck in the Gulf of Mexico, some 30 miles off of Hudson, Florida. But the two men, who are seasoned recreational divers, failed to resurface near the 25-foot dive boat that afternoon, officials said.
The dive boat operator alerted authorities and the U.S. Coast Guard subsequently launched a search effort, with help from the Pasco County Sheriff's Office and the Florida Fish and Wildlife Conservation Commission. Four hours later, the crews located Pavlich six miles southeast of the dive site, officials said. His partner was nowhere to be found.
Search and rescue crews resumed their efforts Thursday morning. They searched an area of more than 1,700 square nautical miles before Hayes was spotted alive in the water by an offshore vessel belonging to the Florida Fish and Wildlife Conservation.
"He’s a fighter, he had a will to survive," Lt. George Wells of the Florida Fish and Wildlife Conservation said during a press conference Thursday. "I personally think that’s what helped keep him alive throughout the night."
By that point, Hayes had been treading water for more than 20 hours and was "very exhausted," officials said. He was still in full scuba gear and had a buoyancy compensator, a piece of diving equipment with an inflatable bladder that officials said helped Hayes stay afloat.
"He had his diver buoyancy compensator, which kept him alive. He had a flashlight. He drank water," Coast Guard Cmdr. Bill Walsh told ABC News' Tampa affiliate WFTS on Thursday. "But also, he had the will to live."
Officials said Pavlich had no reported injuries. WFTS reported that Hayes is said to be doing OK, though both men are exhausted from the ordeal.