Brookville, PA – After a bear was spotted in Brookville this week, police and the Game Commission want you to know what to do if you happen to see it.

The bear was spotted at least three times yesterday, plus many other times in the past few weeks.

Generally, bears are afraid of humans and would much rather run from people than attack them.

However, they can certainly be dangerous if you get too close, if you corner or threaten them, or if you’re close to their cubs.

If you see a bear, stay as far away as possible. Do not approach it, but make it aware of your presence by making a loud noise and waving your arms. Back away slowly, always keeping an eye on where it is. You should be extra careful when letting your kids or your pets play outside.

Taking away easy food sources is a good way of preventing bears from coming too far into town. Bring in your bird feeders, and watch where you’re putting your garbage cans.

They’re hoping that, once the food is gone, the bear was go back to a more wooded area instead of in Brookville.

If the bear becomes aggressive or is damaging property or livestock, call the Pennsylvania Game Commission at 814-432-3187 or call 911. 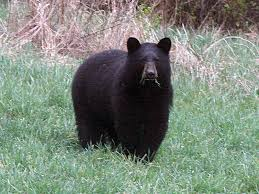 Photo courtesy of the Brookville Police

Click Here for more information about black bears from the Pennsylvania Game Commission.

Quick tips from the Nation Park Service and Game Commission:

Stay calm and remember that most bears do not want to attack you; they usually just want to be left alone. Bears may bluff their way out of an encounter by charging and then turning away at the last second. Bears may also react defensively by wooﬁng, yawning, salivating, growling, snapping their jaws, and laying their ears back. Continue to talk to the bear in low tones; this will help you stay calmer, and it won’t be threatening to the bear. A scream or sudden movement may trigger an attack. Never imitate bear sounds or make a high-pitched squeal.

Identify yourself by talking calmly so the bear knows you are a human and not a prey animal. Remain still; stand your ground but slowly wave your arms. Help the bear recognize you as a human. It may come closer or stand on its hind legs to get a better look or smell. A standing bear is usually curious, not threatening.

Make yourselves look as large as possible (for example, move to higher ground).

If the bear is stationary, move away slowly and sideways; this allows you to keep an eye on the bear and avoid tripping. Moving sideways is also non-threatening to bears. Do NOT run, but if the bear follows, stop and hold your ground. Bears can run as fast as a racehorse both uphill and down. Like dogs, they will chase ﬂeeing animals. Do NOT climb a tree. Both grizzlies and black bears can climb trees.

Leave the area or take a detour. If this is impossible, wait until the bear moves away. Always leave the bear an escape route.

Be especially cautious if you see a female with cubs; never place yourself between a mother and her cub, and never attempt to approach them. The chances of an attack escalate greatly if she perceives you as a danger to her cubs.

Travel in groups. Groups of people are usually noisier and smellier than a single person. Therefore, bears often become aware of groups of people at greater distances, and because of their cumulative size, groups are also intimidating to bears.

Do not allow the bear access to your food. Getting your food will only encourage the bear and make the problem worse for others.