DuBOIS – This spring, Penn State DuBois was the first university to participate in the inaugural Alternative Break Service Program at Flight 93 National Memorial near Shanksville, Pennsylvania.

Although this is the first time the Memorial has hosted an Alternative Break program, students in the Penn State DuBois Wildlife Technology program have participated in work at the site for five years, reclaiming areas that are former strip mines.

The event aims to reforest the site where Flight 93 crashed on September 11, 2001.

“At the time the plane went down, much of it was an old reclaimed strip mine. At the time it was done, it qualified as reclaimed.  It was planted in grass,” Roen explained.  “Now, they want a living memorial, and to take it back to how it was pre-mining, and to really create a beautiful area to commemorate the 40 people who died there.”

John Bernstiel, a national parks service ranger who manages the Flight 93 Memorial added, “Coal was mined here for the better part of 40 years. Although the coal industry brings a lot of prosperity to the area in the form of well-paying jobs and business, strip mining is a very invasive process that is harmful to the land. Certain steps have to be taken to reclaim or heal the land after the mining is finished. This process can take decades.

Paul Murdoch, the architect of the memorial, working with his firm and landscape architect, decided that he wanted to directly incorporate this reclamation process into his design. He did this through natural elements such as our wetlands and 40 memorial groves, and also through the planned reforestation project, now in its seventh year. His idea was that we could help heal this scared landscape, as we as a country continued to heal after the events of September 11.”

During their latest trip to the property, Penn State DuBois students joined around 400 other volunteers from businesses and organizations who assembled teams for the effort. All told, 11,000 seedlings were sorted and planted during the weekend planting event. Volunteers also built bluebird boxes that will attract the birds to populate the area, and performed other clean-up and maintenance work.

“This large, living memorial needs a lot of year round care to keep it looking beautiful and fit for the 400,000 visitors that come through here every year,” Bernstiel said. “From cleaning up trash, to maintaining our memorial trials, to just keeping up with mowing the grass, this work is primarily conducted by our very small but amazing maintenance staff. We supplement their work with, you guessed it, volunteers. On top of the contributions our regular volunteers make to this effort, we also host groups, including student, veteran, and cooperate groups, who come to the memorial to complete service projects. These are maintenance projects that range from large, to small. These group efforts go a long way in assisting our staff with the daily and yearly up keep of the memorial grounds.”

Through the involvement of the Penn State DuBois Wildlife Technology Program with the memorial project over the past five years, students have contributed thousands of hours of work. They’ve also had opportunities to learn new things, and gain hand-on experience that will prove useful in their careers in conservation, environmental protection, and related fields.

“Five years ago we were contacted by Penn State Altoona to help with ‘Plant a Tree for Flight 93’, so we went with them as a planting team,” Roen recalled. “The next year they asked us to be a support team, providing leadership for other teams in sorting and planting saplings. This year we were honored to be the first university to participate in their Alternative Break Service Program.  There were other professionals there from different national parks, and the students got to learn about their careers in law enforcement, maintenance, and conservation.  The Memorial put us up at Camp Allegeny and hosted team-building events from campfire discussion of the meaning of service to a rock-climbing wall and Escape Room.”

Student Jacob Wolfe said, “I thought the trip was wonderful. I had lots of fun, and learned lots of new information. I really liked learning about Pennsylvania’s western national parks. My favorite part of the trip was when we put the bluebird boxes up and tree swallows showed up immediately after the boxes were put up.”

Multiple Penn State DuBois students have also completed internships at the memorial over the years. Internship work included an invasive species study conducted by students at the site, which was used to and advise the National Parks Service on which plant species should be removed, and which should be cultivated.

Bernstiel said all of this work, and the results, provide a lasting impact. “In the larger scope, the memorial’s significance is directly tied to the events that took place on September 11, 2001, and how that fateful day changed the world,” he said. “The Flight 93 story itself is significant in the fact that the 40 crew members and passengers aboard the plane made a decision to fight back against their terrorist hijackers in an effort to regain control of the plane. In doing so, they forced the terrorists to crash the plane in a rural reclaimed strip mine site near Shanksville, PA. This resulted in the terrorist not reaching their intended target, most likely the U.S. Capitol building, and saved the lives of possibly hundreds of people who would have been in and around the Capitol that morning. Many view these 40 individuals as heroes and as the first combatants in the War on Terror. Flight 93 National Memorial is dedicated to their actions and memory.”

In front, left to right: Katelyn Blystone and Sierra Beiswenger. 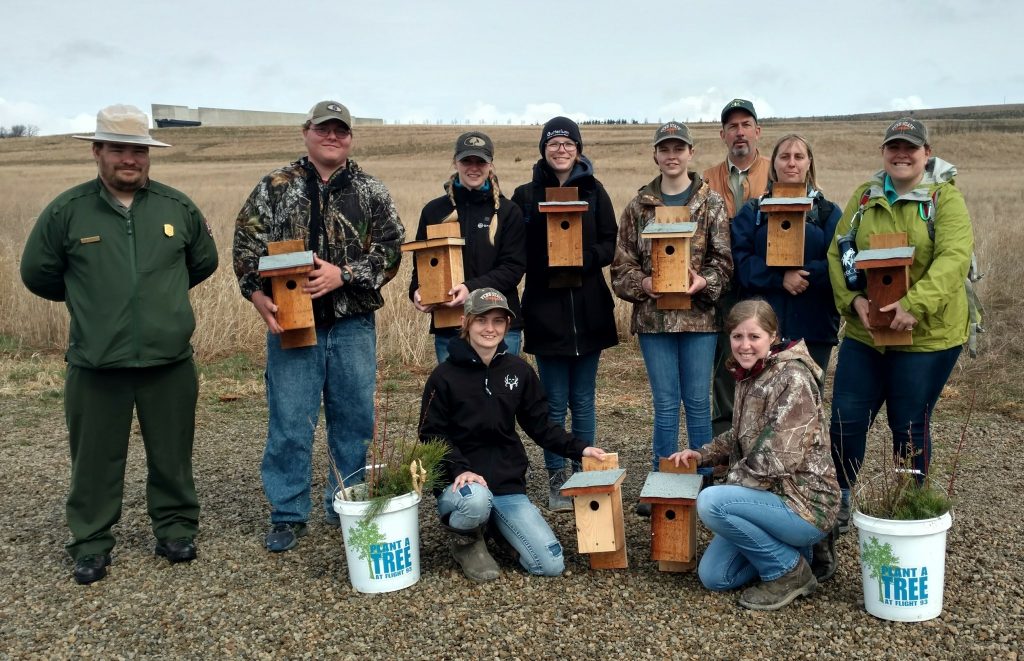