Brookville, PA – Two of the ringleaders of a massive crystal meth ring were found guilty after a week-long trial for their involvement in the “Operation Snail Mail” case. 59-year-old Larry Dean of Mayport, PA, and 51-year-old Daniel Hopkins of Tucson, AZ, were found guilty of all 21 charges they were facing.

Dean and Hopkins will receive their sentences on April 4. Both could face lengthy prison time, including a maximum sentence of up to 340 years in jail each, effectively spending the rest of their life behind bars.

Fellow ringleader Joseph Kot, Sr., was previously sentenced up to 20 years in prison.

Listen to statements from Attorney General Josh Shapiro about Operation Snail Mail and the problem of drugs throughout Pennsylvania.

Jefferson County District Attorney Jeff Burkett said in a statement, “Dean and Hopkins were at the top of our supply chain in this case. They were the ones importing pounds of methamphetamine from the Tucson, Arizona area directly into Jefferson County using the United States Mail. From there, it was being distributed widely throughout Jefferson, Clearfield, and Clarion Counties. I am very gratified to have taken down the two who were at the top rung of this evil scheme.”

Burkett, who tried this case along with Senior Deputy Attorney General Mamie Sheehan-Balchon, said, “This case was a wonderful example of what happens when agencies band together in a common cause. This case involved the Pennsylvania State Police, the Pennsylvania Office of Attorney General, and the United States Postal Inspectors. We could not have obtained these convictions without all of their combined hard work. Also, it was truly a pleasure trying this case with SDAG Sheehan-Balchon. She worked so very hard on this case and shouldered a lot of the burden. I am very thankful for her efforts.”

The Operation Snail Mail drug bust last September caught 30 meth dealers who were shipping and selling $1.6 million in crystal meth via the US Postal System. At least 35 pounds of meth was shipped from Arizona and California to North Central Pennsylvania.

The amount of drugs sold would equal somewhere between 32,000 and 64,000 doses of meth, spread throughout Clearfield, Jefferson, Elk, Clarion, and Forest counties.

Among the 30 people charged in the meth ring were 11 people from DuBois, three from Brockway, three from Brookville, two from Luthersburg, one from Falls Creek, one from Reynoldsville, and one from Clearfield. 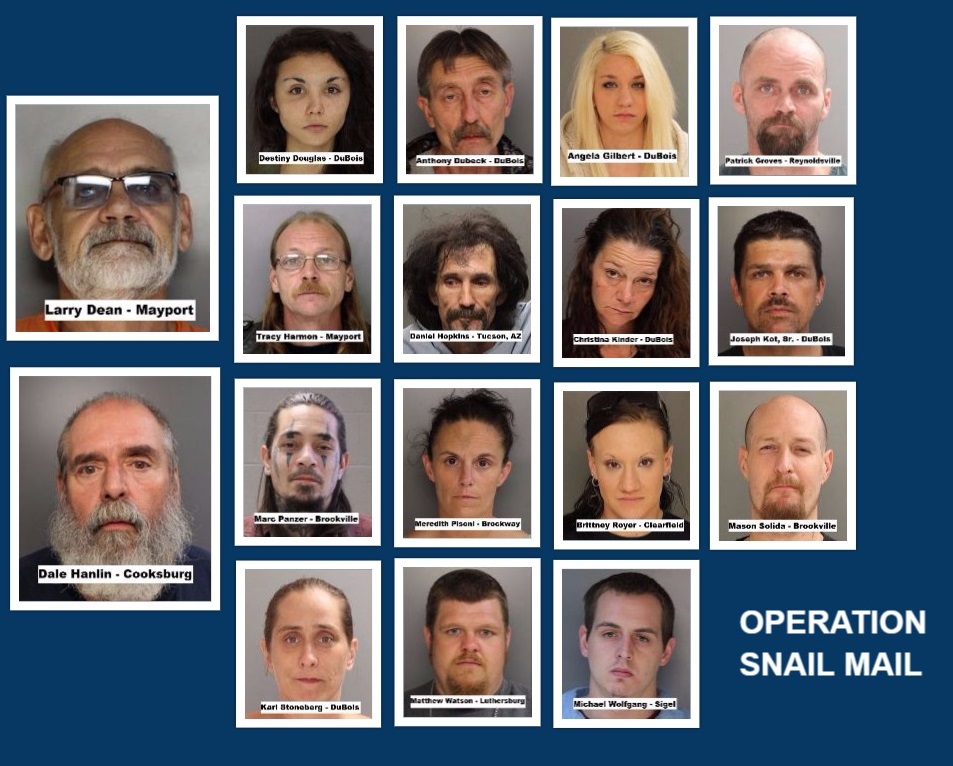 To date, 23 of the defendants in Operation Snail Mail have pleaded guilty to their charges. The following individuals were charged with conspiracy, possession with intent to deliver drugs and corrupt organizations on September 25, 2017: